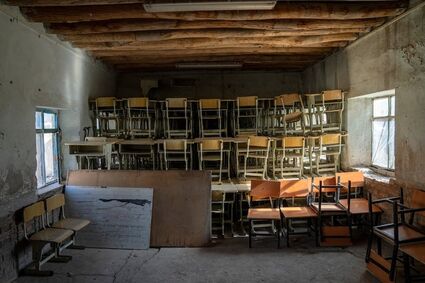 A classroom that previously was used for girls sits empty in Kabul, Afghanistan, Thursday, Dec. 22, 2022. The country's Taliban rulers earlier this week ordered women nationwide to stop attending private and public universities effective immediately and until further notice. They have banned girls from middle school and high school, barred women from most fields of employment and ordered them to wear head-to-toe clothing in public. Women are also banned from parks and gyms.

KABUL, Afghanistan - The minister of higher education in the Taliban government on Thursday defended his decision to ban women from universities - a decree that had triggered a global backlash.

Discussing the matter for the first time in public, Nida Mohammad Nadim said the ban issued earlier this week was necessary to prevent the mixing of genders in universities and because he believes some subjects being taught violated the principles of Islam. He said the ban was in place until further notice.

In an interview with Afghan television, Nadim pushed back against the widespread international condemnation, including from Muslim-majority countries such as Saudi Arabia, Turkey and Qatar. Nadim said that foreigners should stop interfering in Afghanistan's internal affairs.