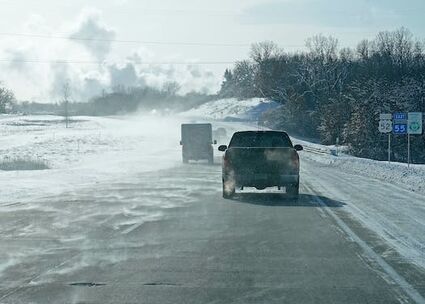 Snow blew across Hwy. 52 near the Pine Bend Refinery in Rosemount on Thursday.

MISSION, Kan. - Thousands of flights were canceled and homeless shelters were overflowing Thursday amid one of the most treacherous holiday travel seasons the U.S. has seen in decades, with temperatures plummeting 50 degrees Fahrenheit in some areas and forecasters warning of an impending "bomb cyclone" that could make conditions even worse before Christmas.

The frigid air was moving through the central United States to the east, with windchill advisories affecting about 135 million people over the coming days, weather service meteorologist Ashton Robinson Cook said Thursday. Places like Des Moines, Iowa, will feel like minus 37 degrees, making it possible to suffer frostbite in less than five minutes.

"This is not like a snow day when you were a kid," President Joe Biden warned Thursday in the Oval Office after a briefing from federal officials. "This is serious stuff."