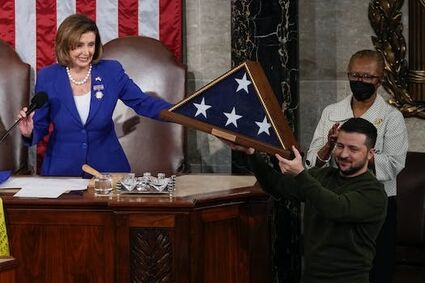 Ukrainian President Volodymyr Zelenskyy held an American flag given to him by House Speaker Nancy Pelosi of Calif., left, after he addressed a joint meeting of Congress on Wednesday.

WASHINGTON - Ukrainian President Volodymyr Zelenskyy thanked "every American" for their support of Ukraine as he delivered an address to Congress on Wednesday aimed at sustaining U.S. and allied support for his country's defense against Russia's brutal invasion.

Zelenskyy called U.S. support vital to Ukraine's efforts to beat back Russia, and thanked lawmakers and everyday citizens for tens of billions of dollars in military and economic assistance over the last year.

The Ukrainian leader predicted that next year would be a "turning point" in the conflict, "when Ukrainian courage and American resolve must guarantee the future of our common freedom - the freedom of people who stand for their values."