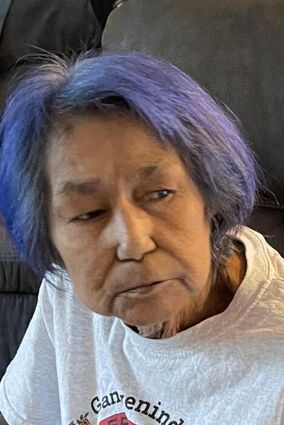 Thelma Jean Goodwin, 74, of Bemidji, MN passed away on December 18, 2022, at her home. She was born in Cass Lake, Minnesota to Clifford and Frances (Smith) Jones on March 10, 1948. Thelma was a member of the Leech Lake Band of Ojibwe, Wolf Clan, and was a ceremonial pipe carrier. She lived in various places in Minnesota while growing up. Thelma graduated from High School in Minneapolis and later graduated from Augsburg College and Bemidji State University with a double major in Social Studies and Political Science. She worked as a financial aid worker for Beltrami County HHS. Thelma loved going to the casinos, watching the Minnesota Vikings, spending time with family, friends, and grandchildren. She enjoyed playing back gammon and road trips.

A Traditional Wake will begin on Wednesday, December 21, 2022, at 2:00 PM and continue until the 11:00 AM Traditional Funeral Service at the Veterans Memorial Building. Cass Lake, Minnesota. A private burial will be at a later date. Arrangements are by Whispering Pines Funeral & Cremation Service. Walker, Minnesota.