Whether traveling or staying home, authorities are warning Minnesotans to take the bone-chilling cold seriously 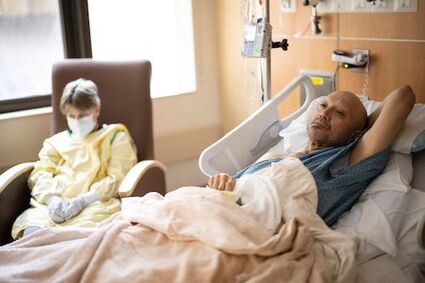 Jeffrey Love rests in bed Tuesday alongside his wife, Laurel, after receiving a skin graft a day earlier at the Hennepin Healthcare Burn Unit in Minneapolis.

As Minnesotans brace for a blizzard on the first official day of winter - and the arctic blast that's expected to follow - Jeffrey Love has a message for anybody who plans to venture outdoors.

"Pay attention to what your body is telling you," he said. "This is serious."

Love, 62, didn't do that - and now is recovering from a severe case of frostbite at HCMC in Minneapolis. He recently underwent surgery on his leg and feet to repair the damage they sustained after going numb during a previous cold snap. He may lose a toe or two, he said.