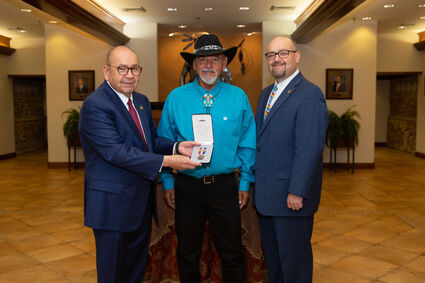 Jesse Lindsey presented the Medal of Freedom to Chickasaw Nation Governor Bill Anoatubby on behalf of the foundation and its crew of 1,512.

"It is an honor to accept the Medal of Freedom on behalf of the Chickasaw Nation in honoring Henry Nolatubby, who was a Chickasaw warrior and a United States Marine," said Governor Anoatubby. "This is a very big deal for our people, and my hope is that through the Lauren Bruner Foundation, the USS Arizona Medal of Freedom will bring honor to our people in the name of Henry in order that future generations of young people might come to learn the important story of the USS Arizona and the men who gave their lives for freedom aboard the ship."

At the request of the USS Arizona Memorial Foundation, the Chickasaw Nation sent Lindsey, Chickasaw Nation Dance Troupe Manager, to Sylacauga, Alabama, to formally bless steel from the battleship used in the medals in December 2021.

The Medals of Freedom produced by the USS Arizona Memorial Foundation contains original steel from the USS Arizona, destroyed Dec. 7, 1941, by Japanese forces in a surprise attack at Pearl Harbor, Hawaii.

The steel was given to Lauren Bruner over a 12-year period. It was gifted to him from various Navy commands at Pearl Harbor.

"This is all about Henry Nolatubby," Lindsey said. "I was there blessing the steel because he is Chickasaw. We were giving notice to our creator to put power into the metal."

Pfc. Nolatubby was among those killed aboard the USS Arizona. A Chickasaw and U.S. Marine, he is recognized as being the first First American killed during World War II. Nolatubby's remains have not been recovered from the USS Arizona wreckage.

Dressed in Chickasaw regalia, Lindsey sang stomp dance songs devoted to warriors as the steel was placed into a crucible for melting.

"During the blessing, I was singing songs we stomp dance to," Lindsey said. "This included a song in honor of our warriors. It is our own song. We have sung it for thousands of years. I was singing as a prayer and blessing."

What remains of the battleship is considered hallowed ground. The USS Arizona was among nearly 20 vessels sunk or badly damaged in the attack that propelled America's participation in WWII.

In total, more than 2,400 Americans died during the attack on Pearl Harbor. An additional 1,000 were wounded. Of those lost, 1,177 were crew members of USS Arizona. The bodies of many crewmen were never recovered.

Officials decided the USS Arizona would remain where it sank, serving as both a funeral and memorial site for those who died that day. The U.S. National Park Service cares for the wreck of the USS Arizona.

"Henry's story needs to be told throughout all of America, which is what we will do through the donations for the Medal of Freedom," McGrath said. "Our foundation wants to be able to explain to young people that there was a First American aboard the USS Arizona. He gave his life so Americans can enjoy and exercise their freedoms every day."

After much discussion, the USS Arizona Memorial Foundation concluded the best way to honor Pfc. Nolatubby, along with other First Americans, was to invite a Chickasaw Nation representative to bless the steel used to cast all USS Arizona Medals of Freedom.

According to the National Museum of the American Indian, 44,000 of an estimated First American population of nearly 400,000 First Americans saw active duty during WWII, which is approximately 10% of its population.

"It was an honor to bless the metal," Lindsay said. "If you think about the first First American to be killed in battle during WWII was a Chickasaw, it is an honor to be a part of such a sacred event. If it wasn't for soldiers, we wouldn't be where we are."

About the USS Arizona Medal of Freedom

"We want future generations to not forget those American heroes who served aboard the USS Arizona," McGrath said. "It is important for all Americans to remember our military heroes like Henry Nolatubby. We get so caught up in everyday life we tend not to look at history as we should. Looking back in history helps solve the problems of the future."

The vision of Lauren Bruner to create the medal was to "find a way to allow families throughout the world to preserve and pass down the legacy of his ship and crew for future generations."

"When the USS Arizona was launched June 19, 1915, the governor of Arizona presented medallions to VIP guests," McGrath said. "From that medallion rose the vision of the USS Arizona Medal of Freedom. The medal is steeped in history."

While the entire medal is not made of Arizona steel, the highly polished, stylized "A" emblazed on the front side of the medal has been authenticated to be from USS Arizona. The foundry that cast the steel was selected based on its ability to use a smelting process that combined Arizona steel with stainless steel, which ensures the steel will never rust again.

"We started the blessing ceremony at 5 a.m. when they lit the furnace," McGrath said. "It lasted most of the morning, ending just before noon. Jesse Lindsey is one of the best-known resources the Chickasaw Nation utilizes. This isn't just because of his cultural dancing, but also because of his heart and the way he embraces his culture."

The Medal of Freedom is available for purchase at http://www.ussarizonamedaloffreedom.org.

Chickasaw Marine among the fallen sailors aboard USS Arizona

Pfc. Nolatubby was 19 years old when he died protecting his country. He is acknowledged as the first First American to be killed in WWII.

"It was a privilege to have Jesse Lindsey come to bless the USS Arizona steel," McGrath said. "I asked Jesse personally to present the Medal of Freedom to Governor Anoatubby on behalf of the Chickasaw Nation. Jesse is interested in honoring Henry.

"We want the Chickasaw people to be aware of Henry Nolatubby. He is an American hero, U.S. Marine and a Chickasaw warrior that came from their nation. This is something that should be shared and passed down from one generation to another," McGrath said.

According to research provided by USS Arizona Memorial Foundation, Nolatubby grew up in Maysville, Oklahoma. He graduated high school in 1939 from Chilocco Indian Agriculture School, a noted Indian boarding school located on the Oklahoma and Kansas border north of Newkirk, Oklahoma. He originally joined the National Guard, only later to enlist in the Marine Corps. Nolatubby was sent to San Diego for basic training.

After additional training, Pfc. Nolatubby was stationed aboard the USS Arizona. Survivors of the USS Arizona recount many sailors and Marines already at their guns when "quarters" sounded, sending each man to his battle station.

"With Henry Nolatubby being a member of the Marine Detachment aboard USS Arizona, Lauren Bruner believed that Henry was helping to man one of the 5-inch guns directly below Lauren Bruner's battle station," McGrath said. "Our research shows that Henry made it above decks. It was about 14 minutes from the start of the attack until the Arizona blew up.

"The U.S. Marines who were manning the Arizona's guns put themselves on the front lines. Marines are tough men and women. Every man was fighting for his life," McGrath said.

While he could not make out individuals, Bruner relayed that the section of 5-inch guns aboard the USS Arizona manned by Marines - where Nolatubby was stationed - was firing at Japanese planes when the bomb hit that exploded and sunk the ship.

The U.S. set headstones for those missing in action or buried at sea at Fort Bliss National Cemetery, El Paso, Texas. Pfc. Nolatubby's name is listed on Tablets of the Missing, National Memorial Cemetery of the Pacific, USS Arizona Memorial.