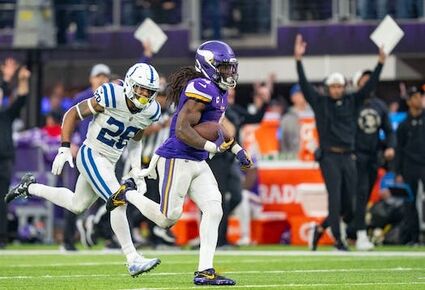 In offseason workouts this spring, the Vikings experimented with a new role for running back Dalvin Cook, lining him up out wide and in the slot frequently enough to suggest his sixth season in Minnesota would look different than any of his first five.

The Vikings ran their offense through Cook, as often as he was on the field, for most of his five years under former coach Mike Zimmer. That was especially true from 2019-21, when the Vikings built their offense around Gary Kubiak's wide zone scheme that put Kirk Cousins under center and frequently had Cook 8 yards deep in the backfield. In those three seasons, Cook logged 23 games of 20 carries or more, which led to him getting a five-year, $63 million contract from the Vikings the day before the 2020 season.

Cook has carried more than 20 times only five times this year; according to data from NFL Fast R, the Vikings are throwing roughly 56 percent of the time in neutral game situations this year, up from 48 percent in their final three years under Zimmer.