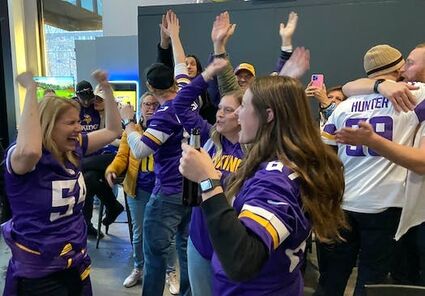 Minnesota Vikings fans celebrated at Off the Rails Public House after the Vikings came back to beat the Indianapolis Colts in overtime at U.S. Bank Stadium on Saturday,

From Section 316 at U.S. Bank Stadium, things were looking bleak.

Some fans started leaving in the middle of the second quarter, when the Vikings looked more like a Keystone Kops routine than a team trying to clinch the NFC North. Paper airplanes rained down from bored fans. When quarterback Kirk Cousins kneeled to end the first half, the Vikings down 33-0 to a mediocre Indianapolis Colts team, the stadium echoed with boos.

If Brett Delage hadn't driven from Fergus Falls with his wife for seats he bought for $120 apiece, he said, he would have left at halftime too. It wasn't just that his team was losing. It was that his team was pathetic.