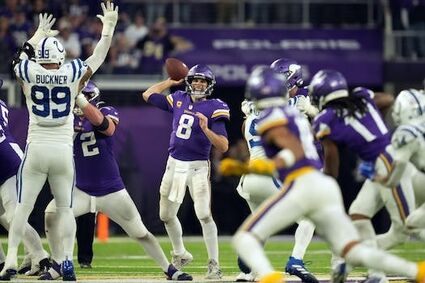 Vikings quarterback Kirk Cousins threw under pressure in overtime against the Colts on Saturday.

Kirk Cousins was 4 years old on Jan. 3, 1993, when the Bills came back from a 35-3 deficit to beat the Houston Oilers in the AFC wild-card playoffs. Until Saturday, the Frank Reich-directed rally was the largest in NFL history, earning it a spot in the canon of classic games replayed on NFL Network.

The Vikings quarterback had seen replays frequently enough to have committed some of the game's details to memory, but he was fuzzy on its defining statistic: He thought the Bills were down by 35 points in the game, not 32.

"Walking off the field, when someone said [ours] was the largest comeback, I thought of Frank Reich, the Bills, [Oilers], Warren Moon, that game in Buffalo," Cousins said. "I thought it couldn't have been bigger than that comeback. Somebody told me it was. I don't know the numbers. Really, it was bigger than that one? That one still to this day, I wonder, 'How did that happen?' "