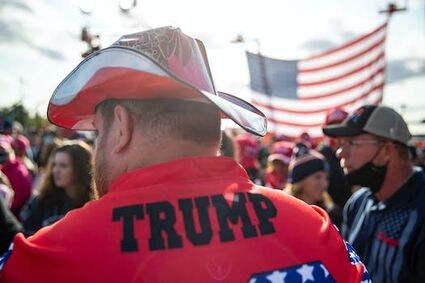 A Trump campaign volunteer looked over the crowd at Bemidji Aviation Services in September 2020 as attendees awaited the president's arrival.

ELK RIVER, MINN. - Nadine Ricke isn't sure who she will support for president in 2024, but the 64-year-old Republican knows it won't be Donald Trump.

"He's kind of gone off the rails," Ricke said while bagging pastries for customers at the Blue Egg Bakery on Main Street. Once a Trump supporter, Ricke said she soured on the former president "when he didn't want to give up the White House."

At Daddy-O's Cafe next door, owner Jeff Krueger said he would love to see Trump become the nominee again - but he doesn't know if he can win. Krueger, 67, raised concern about some of Trump's rhetoric, including his recent suggestion that the Constitution should be suspended to put him back in office.