'This isn't war. It's the destruction of the Russian people by their own commanders' 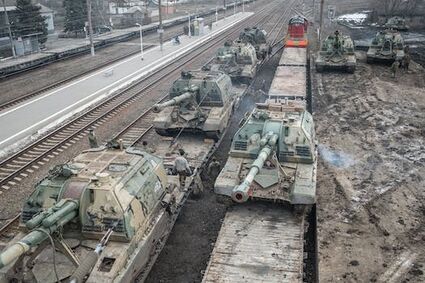 Russian howitzers are loaded onto train cars at a station outside Taganrog, Russia, near the border with Ukraine, on Tuesday, Feb. 22, 2022. A New York Times investigation based on interviews, intercepts, documents and secret battle plans shows how a "walk in the park" became a catastrophe for Russia.

They never had a chance.

Fumbling blindly through cratered farms, the troops from Russia's 155th Naval Infantry Brigade had no maps, medical kits or working walkie-talkies, they said. Just a few weeks earlier, they had been factory workers and truck drivers, watching an endless showcase of supposed Russian military victories at home on state television before being drafted in September. One medic was a former barista who had never had any medical training.

Now, they were piled onto the tops of overcrowded armored vehicles, lumbering through fallow autumn fields with Kalashnikov rifles from a half-century ago and virtually nothing to eat, they said. Russia had been at war most of the year, yet its army seemed less prepared than ever. In interviews, members of the brigade said some of them had barely fired a gun before and described having almost no bullets anyway, let alone air cover or artillery. But it didn't frighten them too much, they said. They would never see combat, their commanders had promised.