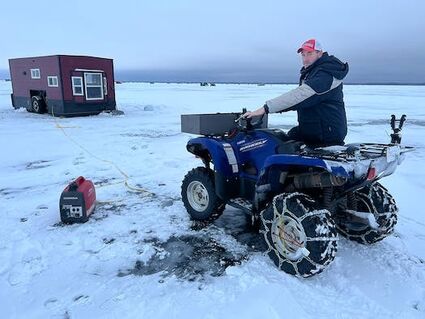 Lindy Frasl of Brainerd towed his wheelhouse onto the Upper Red Lake ice with his chained-up four-wheeler.

UPPER RED LAKE - Growing up in Brainerd, Lindy Frasl learned about ice fishing at a young age. So enamored was he with the sport and the cool times it offered on winter days that he built his own shack at age 14, an 8-foot-square structure that served as an incubator of sorts for his growing interest in cold-weather angling.

Last weekend, he and I and Samantha - "Sam'' - Wheeler, Lindy's girlfriend, were sitting atop 10 inches of good ice on this giant lake, jigging for walleyes while chatting about everything - and nothing.