Russia: US air defense systems could be targets in Ukraine 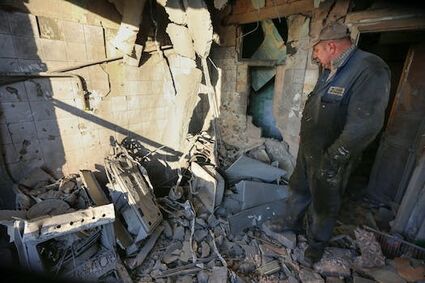 A man examines a damaged apartment building after what Russian officials in Donetsk said was a shelling by Ukrainian forces, in Donetsk, the capital of Russian-controlled Donetsk region, eastern Ukraine, Thursday.

KYIV, Ukraine - Russia's Foreign Ministry warned Thursday that if the U.S. delivers sophisticated air defense systems to Ukraine, those systems and any crews that accompany them would be a "legitimate target" for the Russian military, a blunt threat that was quickly rejected by Washington.

The exchange of statements reflected soaring Russia-U.S. tensions amid the fighting in Ukraine, which is now in its 10th month.

Russian Foreign Ministry spokeswoman Maria Zakharova said the U.S. had "effectively become a party" to the war by providing Ukraine with weapons and training its troops. She added that if reports about U.S. intentions to provide Kyiv with Patriot surface-to-air missile system prove true, it would become "another provocative move by the U.S." and broaden its involvement in the hostilities, "entailing possible consequences."