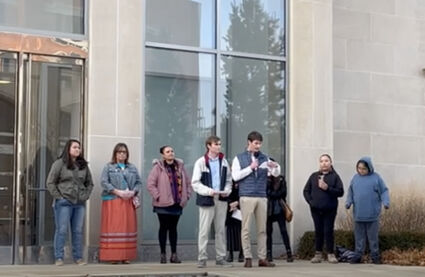 Two defendants publicly apologized on Saturday, Dec. 10, for stealing a panel of an outdoor Native American art installation on the University of Kansas campus last year.

The piece, "Native Hosts," Hock E Aye Vi Edgar Heap of Birds (Cheyenne, Arapaho), consisted of five metal panels that include the names of the Kaw, Potawatomi, Ioway, Ne Me Ha Ha Ki, and Kickapoo tribes. The theft came just weeks after four panels in the installation were vandalized in an unrelated incident by two defendants in September 2021. Within a day, KUPD recovered and returned to the panel to the university's Spencer Museum of Art.

John Wichlenski and Samuel McKnight, both 23, faced charges of theft of a value of at least $1,500 but less than $25,000 - level-9 felonies. The defendants agreed to diversions, and as a part of their diversion agreements, both participated in a restorative justice circle facilitated by Building Peace that included representatives from Spencer Museum and KU's First Nations Student Association (FNSA)