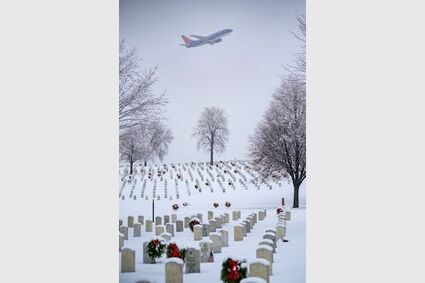 A Sun Country flight takes off as snow falls on headstones at Fort Snelling National Cemetery.

A storm that has battered much of Minnesota for the past three days finally touched the Twin Cities on Thursday, dropping enough snow overnight to coat roads and make for slippery travel.

Minneapolis, St. Paul and numerous suburbs called snow emergencies as a winter weather advisory remained in effect until 9 p.m. for the Twin Cities and much of central Minnesota, where 3 to 4½ inches of snow fell overnight Wednesday through Thursday afternoon, the National Weather Service said. The Weather Service initially issued a winter storm warning for the Twin Cities, but it was downgraded to an advisory Thursday.

To the north, 3 to 5 inches fell by Thursday afternoon in an area from Morris to St. Cloud, while 2 to 4 inches fell along the Interstate 90 corridor from Worthington to Rochester, the Weather Service said.