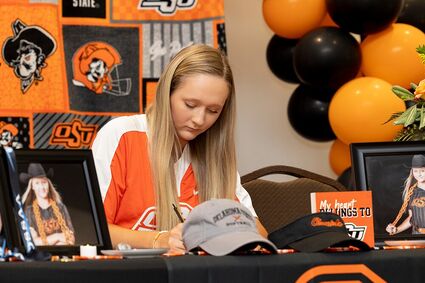 In November, the Tishomingo High School standout announced she has committed to continuing her career at the next level with the Oklahoma State University (OSU) Cowgirls.

She said OSU's coaching staff and the team's winning record played heavily in her decision to play in Stillwater.

"I love coach (Kenny) Gajewski and his coaching staff," Miss Wood said. "OSU softball teams have a chance to compete for the national title every year."

Miss Wood said putting herself in position to gain the attention of a Power Five, Division 1 university team involves more than talent. It requires a heavy dose of work ethic.

"It's been tough," she said. "Every day you have to work hard. There's no slack time at all, but all the hard work to get to this moment paid off."

"She's been playing ball since she was 4 years old," Mr. Wood said. "We've traveled all over the country playing softball to be able to get to this point. It's one of those things you have to do – play a lot of ball – to continue to get to her dream.

"It's been a lot of road trips, but I wouldn't trade it for anything in the world," he said.

Mr. Wood said more than a dozen Division 1 schools were interested in recruiting his daughter, as were dozens of lower level universities.

"She had a lot of opportunities, and OSU started looking at her, and she knew that's where she wanted to go."

Though she won't be directly participating in them, Miss Wood is also attracted to the fact OSU has an intensive agricultural curriculum and a rodeo team.

"She's been riding since she was 3 years old," Mr. Wood said. "She was excited the other day because she got to visit OSU's equestrian center."

The Tishomingo High School star's impressive stats playing for her hometown team as a senior saw her tally 61 hits, 32 RBIs, 10 doubles, eight triples and five home runs. Total runs scored - 55. She had a .614 on-base percentage, a .545 batting average and landed safely on all of her 32 base stealing attempts.

On defense the outfielder saw the ball come her way 29 times with zero errors. Miss Wood's senior season saw her named All District 3A-8 MVP, Lake Country Conference (LCC) Offensive Player of the Year and chosen for its All-Region Team.

To no one's surprise she was also selected All-State first team outfielder this year.

Not that it took until her senior year to start getting noticed. In fact, the accolades came early when Miss Wood was awarded All District 3A-8 outfielder honors in her freshman year, named LCC Newcomer of the Year and appointed to the LCC All-Tournament Team.

Tishomingo won back-to-back state championships in 2019 and 2020. The team earned state qualifier honors in 2021 and were state runner up in 2022.

"We're super proud of Cheyenne," coach Hook said. "She's done a lot for our program. She's been one of the key leaders throughout the last four years.

"We're thankful for the opportunity to coach Cheyenne and be around her family. Congratulations," he said.