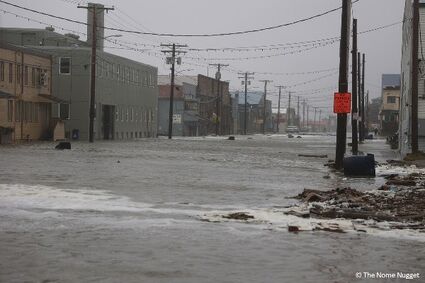 Much of Front Street in Nome, Alaska was underwater on Saturday, September 17, 2022, as the destructive remnants of Typhoon Merbok lashed Nome and many other western Alaska coastal communities. Credit: Nome Nugget

A typhoon, smoke from wildfires, and increasing rain are not what most imagine when thinking of the Arctic. Yet these are some of the climate-driven events included in NOAA's 2022 Arctic Report Card, which provides a detailed picture of how warming is reshaping the once reliably frozen, snow-covered region which is heating up faster than any other part of the world.

This year's Arctic Report Card also features the most comprehensive chapter in the annual report's 17-year history about how these dramatic environmental changes are felt by Arctic Indigenous people, and how their communities are addressing the changes.

"Living and innovating in Arctic environments over millennia, Indigenous peoples have evolved holistic knowledge that provides resilience and sustainability," said Jackie Qatalina Schaeffer, a co-author of the chapter, Director of Climate Initiatives for the Alaska Native Tribal Health Consortium and an Inupiaq from Kotzebue, Alaska. "Addressing the unprecedented environmental change requires listening to one another, aligning values and collaborating together as communities, businesses, governments, Indigenous and non-Indigenous scientists and decision-makers."

"With this important new chapter and other timely additions, the 2022 Arctic Report Card underscores the urgency to confront the climate crisis by reducing greenhouse gasses and taking steps to be more resilient," said NOAA Administrator Rick Spinrad, Ph.D. "The report provides observations and analysis to help build a Climate-Ready Nation in a region on the front lines of climate change."

Compiled by 147 experts from 11 nations, the report card includes three sections: Vital Signs, Indicators and Frostbites. Vital Signs provide annual updates on key topics. This year, a chapter on precipitation has been added, reflecting an improvement in available data and showing the dramatic increase in precipitation across the Arctic in recent decades. Indicators explore topics that are periodically updated, and Frostbites report on new and emerging issues.

Major findings in this year's report

Arctic annual air temperatures from October 2021 to September 2022 were the sixth warmest dating back to 1900, continuing a decades-long trend in which Arctic air temperatures have warmed faster than the global average. The Arctic's seven warmest years since 1900 have been the last seven years.

Arctic sea ice extent (coverage) was higher than many recent years, but much lower than the long-term average. Multiyear ice extent, sea-ice thickness and volume rebounded after a near-record low in 2021, but was below conditions in the 1980s and 1990s, with older ice extremely rare. Open water developed near the North Pole for much of the summer, allowing polar-class tourist and research vessels easy access. The Northern Sea Route and Northwest Passage were also largely open.

Satellite records from 2009 to 2018 show increasing maritime ship traffic in the Arctic as sea ice declines. The most significant increases in traffic are occurring among ships traveling from the Pacific Ocean through the Bering Strait and Beaufort Sea. This opens economic opportunities for new trade routes and also poses potential human-caused stresses on Arctic people and ecosystems.

Wetter-than-normal conditions predominated over much of the Arctic from October 2021 to September 2022. Precipitation has increased significantly since the 1950s across all seasons and datasets. Heavy precipitation events are more common in the North Atlantic subarctic, while much of the central Arctic shows increases in consecutive wet days and decreases in consecutive dry days.

Typhoon Merbok, which was fueled by unusually warm water in the north Pacific, dramatically shaped 2022 in the Bering Sea region. Merbok struck the west coast of Alaska in mid-September, bringing a destructive storm surge that caused homes to break loose from foundations and damaged infrastructure in several coastal and river communities.

Much of the Arctic continued to show increased ocean plankton blooms in 2022, as has occurred over the 2003-2022 satellite observation period. Summer storms in 2022 in the Bering Sea may have been responsible for higher-than-average plankton blooms due to increased vertical mixing of nutrients from deep ocean waters to the surface.

Two separate reports on Arctic birds reveal opposite health trends. While the populations of Arctic geese across the Arctic are stable or rising, many seabird species, such as ducks, auklets, shearwaters, murres and puffins in the northern Bering and Chukchi seas experienced their sixth consecutive year of a substantial die-off. 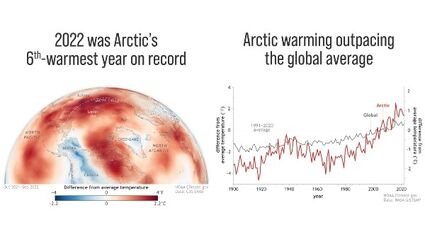 The image on the left depicts the departure from the average near-surface temperature across the Arctic during this period, with redder colors showing areas of greater than average warmth. The graphic on the right shows how the rate of Arctic air temperature warming has outpaced the rate of global warming. Credit: NOAA Climate.gov, based ERA5 and NASA data.

"The Arctic remains a varied and expansive region to monitor, especially as widespread disturbances unfold and seasons shift," said Matthew Druckenmiller, a research scientist with the National Snow and Ice Data Center and the lead editor of the 2022 Arctic Report Card. "To understand its transition, we need local to international partnerships, especially with Arctic peoples and Indigenous communities, who are vital to the use of diverse observations and knowledge, as well as to identifying solutions to long-term climate impacts and abrupt disturbances."

For the full NOAA 2022 Arctic Report Card and a short video please go online to: https://www.arctic.noaa.gov/Report-card

Climate, weather, and water affect all life on our ocean planet. NOAA's mission is to understand and predict our changing environment, from the deep sea to outer space, and to manage and conserve America's coastal and marine resources. See how NOAA science, services, and stewardship benefit your community: Visit noaa.gov for our latest news and features, and join us on social media.