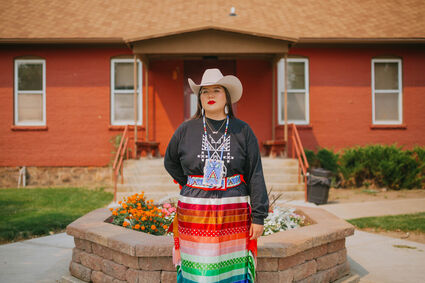 Chelysa's piece, titled "Bloom," is a self-portrait that represents her personal growth with blooming flowers, open arms, and butterflies representing a healed soul and new beginnings. "The overall visual I wanted the piece to show is that no matter where you're at in life, no matter what hardships you are going through, you have the ability to heal, the ability to start over. When we go through our different stages in life, relationships, hardships, pain, love, etcetera... we bloom through it all."

Chelysa has certainly bloomed as an artist and entrepreneur. In 2021 her design "Unity" won the Tribal College Blanket Competition held by the American Indian College Fund and Pendleton Woolen Mills. She also completed her degree in business administration and general studies in May 2021 at Ft. Peck Community College, a tribal college on her home reservation in Montana. She has since started her own small business selling merchandise under her brand Chief'n and also works as freelance artist.

As the Grand Prize Winner of Creative Native, Chelysa will receive $1,000 and serve as a Gen-I Ambassador. According to Chelysa, ambassadors serve as representatives of their communities who volunteer where needed and help strengthen the voices of Native youth. The program helps ambassadors to develop leadership skills and create positive change. Chelysa was also flown to Washington, D.C. for the November 14th release of a report with her winning artwork on the cover. She says the event and overarching GEN-I program are helping her to become more educated on issues facing Native communities and helping her contribute to creating change.

"Educated Natives with open minds, a voice, and determination is what we need to make a better future not only for ourselves, but for future generations," Chelysa said.