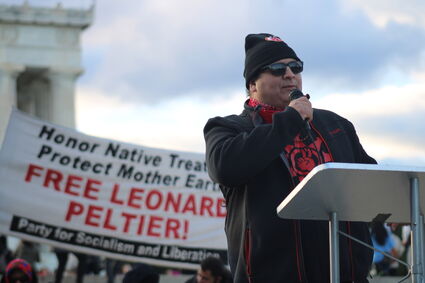 Nick Tilsen, President and CEO of NDN Collective, speaks at the "Walk to Justice for Leonard Peltier" in Washington, D.C. on November 13, 2022. (Photo/Darren Thompson)

"My case held a mirror up to the so-called legal system, where prosecutors – fueled by white fragility and fear of Indigenous power – wasted years of state resources to intimidate, criminalize, and violate me," said Nick Tilsen, president and CEO of NDN Collective in a press release. "The fact that I've gone from facing 17 years in prison to all charges dismissed is not a coincidence or an act of justice – it's evidence that the charges were bogus from the start. We only won because we had effective tools and a strong network to fight them, and did not back down until we had exhausted the system that was built to exhaust us."

Tilsen was charged with second-degree robbery and grand theft in the alternative, as well as two counts of simple assault against law enforcement officers and three other misdemeanor crimes: standing on highway with intense to impede-stop traffic, failure to vacate/ordered to leave, and disorderly conduct-unlawful assembly. Tilsen's felony charges stem from allegedly stealing a shield from a female Air National Guardsman and assaulting her, all felonies in South Dakota.