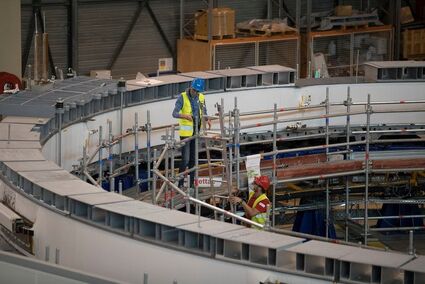 Technicians work on the poloidial field coil assembly line at the ITER (the International Thermonuclear Experimental Reactor) in Saint-Paul-Lez-Durance, southern France, Tuesday, July 28, 2020. A project of daunting proportions and giant ambitions replicating the energy of the sun is entering a critical phase as scientists and technicians begin piecing together massive parts built around the globe of a nuclear fusion device, an experiment aimed at showing that clean energy, free of carbon emissions, can keep our planet humming.

The Department of Energy plans to announce Tuesday that scientists have been able for the first time to produce a fusion reaction that creates a net energy gain - a major milestone in the decades-long, multibillion-dollar quest to develop a technology that provides unlimited, cheap, clean power.

The aim of fusion research is to replicate the nuclear reaction through which energy is created on the sun. It is a "holy grail" of carbon-free power that scientists have been chasing since the 1950s. It is still at least a decade - maybe decades - away from commercial use, but the latest development is likely to be touted by the Biden administration as an affirmation of a massive investment by the government over the years.

Huge amounts of public and private funds have been funneled into the fusion race worldwide, with the aim of ultimately manufacturing fusion machinery that could bring electricity to the grid with no carbon footprint, no radioactive waste and far fewer resources than it takes to harness solar and wind power. Beyond the climate benefits, promoters say it could help bring cheap electricity to impoverished parts of the world.