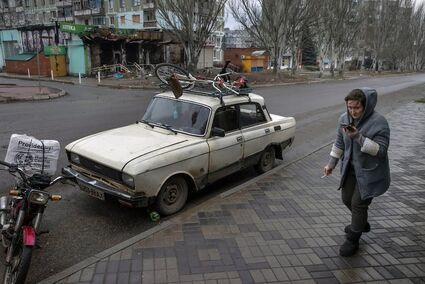 A woman speaks on her smartphone as she prepares to evacuate from the frontline city of Bakhmut, Ukraine, on Monday, Dec. 12, 2022. A flurry of diplomatic talks about support for Ukraine are being held on Monday, with leaders of the Group of 7 nations and European Union foreign ministers meeting to shore up military and humanitarian support.

KYIV, Ukraine - Ukrainian President Volodymyr Zelenskyy pressed Western leaders again on Monday to provide more advanced weapons to help his country in its war with Russia, and he repeated his calls for Russian forces to withdraw from occupied areas of Ukraine, suggesting Christmas as a date to retreat.

During a video conference, Zelenskky told host Germany and other leaders of the Group of Seven industrial powers: "It would be right to begin the withdrawal of Russian troops from the internationally recognized territory of Ukraine this Christmas. If Russia withdraws its troops from Ukraine, then a reliable cessation of hostilities will be ensured."

He added: "The answer from Moscow will show what they really want there: either a further confrontation with the world or finally an end to aggression."