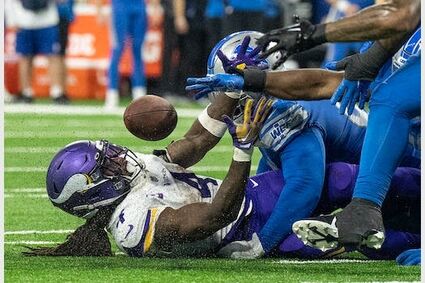 DETROIT - On Sunday at Ford Field, Justin Jefferson broke Sammy White's franchise record for receiving yards in a game with 223.

Playing in front of more than 40 friends and family who'd traveled from his hometown of Holland, Mich., for the game, Kirk Cousins eclipsed 400 yards for the seventh time in his career, completing 30 of his 39 passes for 425 yards while facing steady pressure throughout the game.

And yet, with a chance to clinch the NFC North on Sunday, the Vikings saw their last opportunity for a comeback victory fizzle out when the Lions made tackle Penei Sewell eligible, put him in motion and watched him catch a wide-open 9-yard pass from Jared Goff for a game-clinching first down.