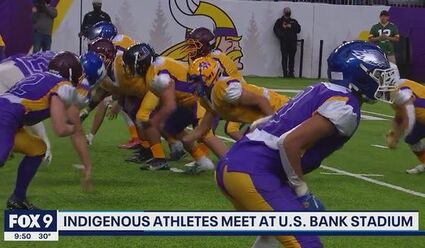 The fifth annual Indigenous Bowl is being held Sunday by the NFL and the American Indian advocacy group 7G Foundation at the home of the Minnesota Vikings.

The event "will offer 75 Native American high school football players from federally recognized tribes across the country the opportunity to further develop and showcase their talents," the NFL noted in its announcement of the event.

The event, which only features graduating seniors, according to the Indigenous Bowl website, kicks off at 10 a.m. CST Sunday. It can be streamed on the Neighborhood Sports Network streaming platform.

In addition, one player on each team in the bowl game will be designated the "Unsung Hero" based on sportsmanship and leadership qualities. The high schools of the two selected players will each receive a $10,000 equipment grant from the NFL.

"We're proud to welcome the Indigenous Bowl back to U.S. Bank Stadium again this season to provide a memorable game and experience," said Mark Wilf, co-owner and president of the Vikings.

This is the second year in a row that the Vikings have hosted the event in their stadium.