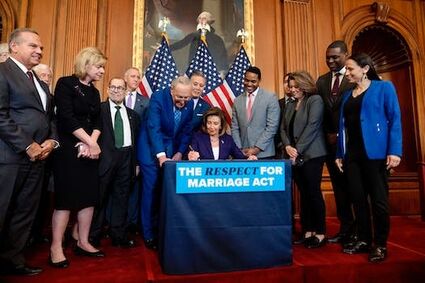 WASHINGTON - Minnesota Democrats helped make history Thursday with their support of a measure that will put into federal law protections for the marriages of same-sex and interracial couples.

Lawmakers quickly rallied around the effort on Capitol Hill in a bipartisan embrace of equality for same-sex couples, marking a new chapter on an issue that was once far more politically divisive nationwide.

"Today really alleviates a lot of fear among same-sex married couples that an activist, extremist Supreme Court could take those rights away," said Democratic U.S. Rep. Angie Craig, who in 2018 became the first openly gay person elected to Congress from Minnesota. "It's a little surreal to be here voting to enshrine my own marriage, and those of millions of Americans, into law."