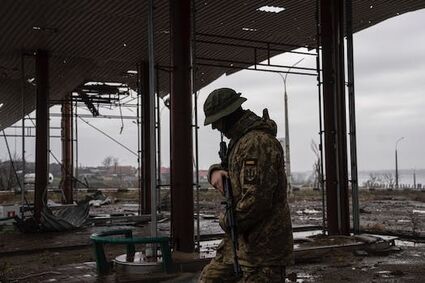 A Ukrainian serviceman patrolled the area near the Antonovsky Bridge, which was destroyed by Russian forces after withdrawing from Kherson, Ukraine, Thursday, Dec. 8, 2022.

Ukraine's nuclear company Energoatom said in a statement that Russian forces occupying the plant have placed several Grad multiple rocket launchers near one of its six nuclear reactors. It said the offensive systems are located at new "protective structures" the Russians secretly built, "violating all conditions for nuclear and radiation safety."

The claim could not be independently verified.