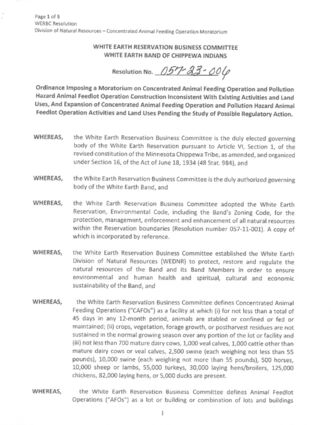 WHITE EARTH, MINN. – Citing the Band's health and safety, water and land resources, and economic security being threatened by proposed factory farming operations on or near the reservation, the White Earth Reservation Business Committee has passed a resolution on Nov. 18 to impose a moratorium on Concentrated Animal Feeding Operations (CAFOs) and Animal Feedlot Operations (AFOs) constituting environmental hazards.

There are several large factory farms around the edges of the reservation, and a massive 21,000-head dairy cattle feedlot has been proposed by Riverview LLP, just ¾ of a mile west of the reservation. The Riverview operation proposes to spread half of the manure it will produce on Reservation land. In addition, a new large hog feedlot has been proposed within the exterior boundaries of the Reservation in the southwest corner.

The proposed dairy cattle operation alone would produce over 1 million pounds of manure per day. These extremely large factory farms also use high-capacity wells that pump tens of millions of gallons of water per year. The proposed dairy cattle operation has asked the Minnesota Department of Natural Resources for a permit to take 325 million gallons of water per year from the Wild Rice River, in addition to 40-50 million gallons per year from groundwater. 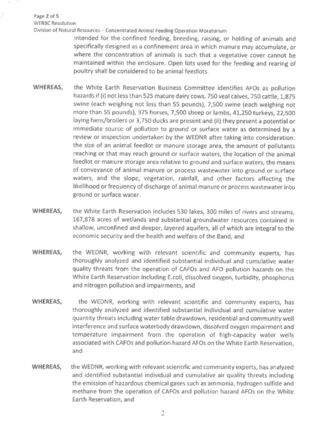 The purpose of the moratorium is to allow the Band sufficient time to undertake an interdisciplinary process of data collection, review, analysis and regulatory and technology development sufficient to regulate CAFOs and pollution hazard AFOs in a manner that protects the Band's core interests related to human health, natural resource protection and economic security.

The moratorium shall be in effect for two years from the date of adoption, unless terminated earlier or extended further by an ordinance duly adopted by the White Earth Reservation RBC.