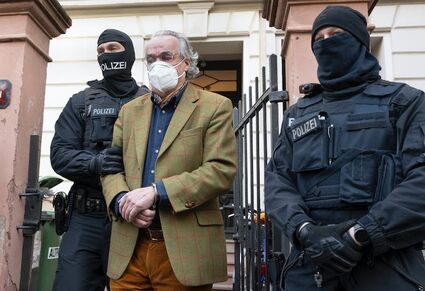 Officers led Heinrich XIII Prince Reuss, center, to a police vehicle during a raid against so-called "Reich citizens" in Frankfurt, Germany, Wednesday, Dec. 7, 2022. The 71-year-old member of the House of Reuss continues to use the title despite Germany abolishing any formal role for royalty more than a century ago.

BERLIN - German police rounded up dozens of people including a self-styled prince, a retired paratrooper and a former judge Wednesday, accusing the suspects of discussing the violent overthrow of the government but leaving unclear how concrete the plans were.

A German official and a lawmaker said investigators may have detected real plotting, drunken fantasizing, or both. Regardless, Germany takes any right-wing threat seriously and thousands of police officers carried out pre-dawn raids across much of the country.

"We're talking about a group that, according to what we know so far, planned to violently abolish our democratic state of law and an armed attack," on the German parliament building, government spokesman Steffen Hebestreit said.