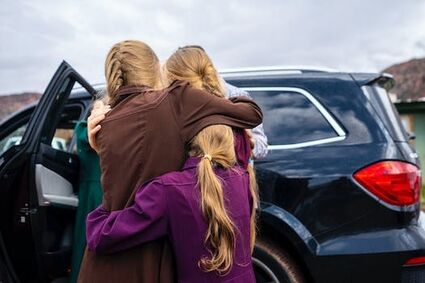 Three girls embrace before they are removed from the home of Samuel Bateman, following his arrest in Colorado City, Ariz., on Wednesday, Sept. 14, 2022.

FLAGSTAFF, Ariz. - The leader of a small polygamous group on the Arizona-Utah border had taken at least 20 wives, most of them minors, and punished followers who did not treat him as a prophet, newly filed federal court documents show.

The filing provides insight into what investigators have found in a case that first became public in August. It came as federal authorities charged three of the self-declared prophet's wives with kidnapping and impeding a foreseeable prosecution after eight girls associated with the group fled from state foster care.

Naomi Bistline and Donnae Barlow appeared in federal magistrate court in Flagstaff on Wednesday. They remain jailed and have court hearings scheduled next week. Moretta Rose Johnson is awaiting extradition from Washington state.