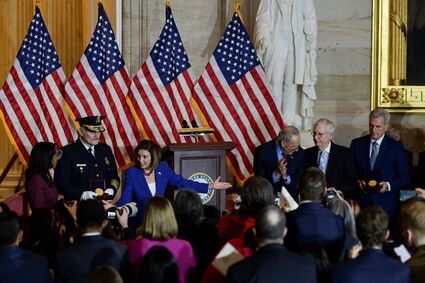 [2/5] Members of Congress honor the U.S. Capitol Police, the Washington D.C. Metropolitan Police, and others who protected the Capitol on January 6, 2021 with the Congressional Gold Medal in Washington, U.S., December 6, 2022. REUTERS/Mary F. Calvert

WASHINGTON, Dec 6 (Reuters) - The mother and brother of police officer Brian Sicknick, who died in the days following the Jan. 6, 2021, attack on the U.S. Capitol, declined to shake the hand of top Republicans Kevin McCarthy and Mitch McConnell at a medal ceremony on Tuesday.

After greeting top Democrats Nancy Pelosi and Chuck Schumer at the award ceremony held in the Capitol Building, Gladys and Ken Sicknick walked by McCarthy and McConnell, the top Republicans in the House of Representatives and Senate, respectively, without acknowledging them. McConnell had reached out his hand, in an apparent handshake attempt.

In video broadcast of the event, at least two police officials could be seen similarly spurning McConnell and McCarthy. Reuters could not immediately identify them, but Washington's district police force as well as the specialized police force in charge of security at the Capitol building were present. Representatives of other law enforcement agencies were also at the ceremony.