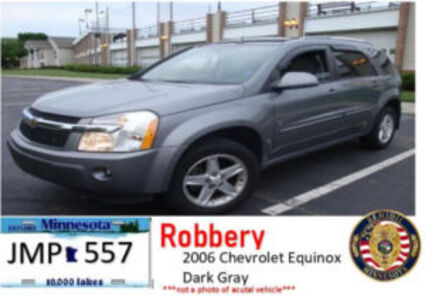 According to the press release, on December 6 at approximately 12:24 p.m., law enforcement received a report of an armed robbery at Wells Fargo Bank in Bemidji. The suspect reportedly left the scene on foot and headed southbound.

The Beltrami County Sheriff's Office, Minnesota State Patrol, FBI, and Minnesota Bureau of Criminal Apprehension all assisted on the scene of the crime.

Officials describe the suspect as a caucasian male wearing a blue and black FEDEX jacket and black hooded sweatshirt. Eye witnesses report the suspect got into a charcoal grey colored Chevrolet Equinox with the Minnesota license plate JMP557. The vehicle is also reported to have a bumper sticker that says "STAY KIND AND HUMBLE."

Bemidji law enforcement is requesting the public's help in locating the vehicle. The suspect is considered armed and dangerous and should not be approached.

If anyone has any information on the vehicle or the crime, they can call the Bemidji Police Department at (218) 333-9111.

[In another report, it was reported this suspect was arrested in the Bemidji area.]