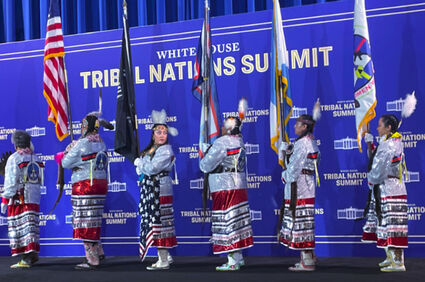 WASHINGTON  - Hundreds of tribal leaders attended the White House Tribal Nations Summit last week in the nation's capital. While most of the summit dealt with policy issues that impact Indian Country, some moments were worth noting, as captured by Native News Online:

A crowd favorite was the posting of the colors by the Native American Women Warriors. This group warrior group is comprised of U.S. Armed Forces veteran Native American women. Instead of cones that are typically sewn onto the regalia, the group's founder Mitchelene BigMan (Apsáalooke), said her dog tags contained her personal vital information from her original dog tag when she served in the U.S. Army.