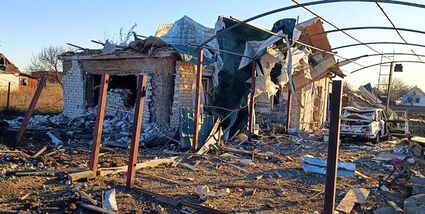 In this photo provided by the Zaporizhzhia region military administration, a damaged building and a car are seen after a Russian strike in the village of Novosofiivka, in the Zaporizhzhia region, Ukraine, Monday, Dec. 5, 2022. Ukrainian officials reported a new barrage of Russian missile strikes across the country Monday, an attack that was anticipated as Russia seeks to disable Ukraine's energy supplies and infrastructure with the approach of winter.

The unprecedented attack in Russia threatened a major escalation of the nine-month war because it hit an airfield housing bombers capable of carrying nuclear weapons. President Vladimir Putin has threatened to use all available means to defend his land, a remark many have interpreted to include nuclear weapons.

Russia has been launching almost weekly bombardments of Ukraine in retaliation for another bold attack - the Oct. 8 truck bombing of a vital bridge linking its mainland to the Crimean Peninsula.