Justices spar in latest clash of religion and gay rights 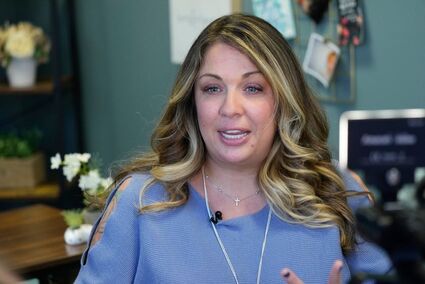 FILE - Web designer Lorie Smith is shown in her office on Nov. 7, 2022, in the southwest part of Littleton, Colo. The Supreme Court is hearing the case Monday, Dec. 5, of Smith, a Christian graphic artist who objects to designing wedding websites for gay couples, a dispute that's the latest clash of religion and gay rights to land at the highest court. Smith says her Christian faith prevents her from creating websites celebrating same-sex marriages.

WASHINGTON - The Supreme Court 's conservative majority sounded sympathetic Monday to a Christian graphic artist who objects to designing wedding websites for gay couples, the latest collision of religion and gay rights to land at the high court.

The designer and her supporters say that ruling against her would force artists - from painters and photographers to writers and musicians - to do work that is against their beliefs. Her opponents, meanwhile, say that if she wins, a range of businesses will be able to discriminate, refusing to serve Black, Jewish or Muslim customers, interracial or interfaith couples or immigrants.

Over more than two hours of spirited arguments, the justices repeatedly tested out what ruling for the designer could mean, using detailed and sometimes colorful hypothetical scenarios. Those included a Black Santa asked to take a picture with a child dressed in a Ku Klux Klan outfit, a photographer asked to take pictures for the marital infidelity website Ashley Madison, and an invented food business called "Grandma Helen's Protestant Provisions."