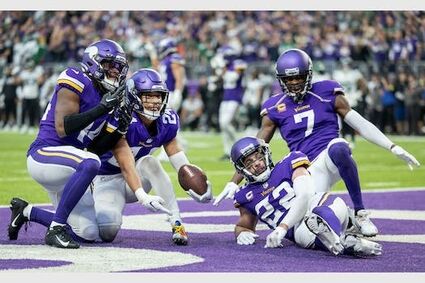 Camryn Bynum (24) of the Minnesota Vikings celebrates with teammates after intercepting a pass in the fourth quarter.

With the Vikings up by five points and protecting their own end zone with 16 seconds to play on Sunday, safety Cam Bynum backpedaled to the goal line, broke on Mike White's pass for Corey Davis and became the fourth member of a club that's been formed either by good fortune, shrewd operation or some combination of the two.

The 2022 Vikings are now 10-2, having defeated the Jets 27-22 on Sunday in the latest performance of an escape act that's by now bordering on the absurd.

How unthinkable has it become? In each of the season's four months, the Vikings have closed out a game with a different member of their secondary recording a takeaway on the team's final defensive play. Josh Metellus intercepted Jared Goff's Hail Mary in September against Detroit. Cameron Dantzler stripped Ihmir Smith-Marsette for a game-sealing fumble in October against Chicago. Patrick Peterson picked off Josh Allen in overtime in November against Buffalo. And on Sunday, Bynum iced the Vikings' first game of December by intercepting White's fourth-down pass and sliding to the U.S. Bank Stadium turf.