Trump rebuked for call to suspend Constitution over election 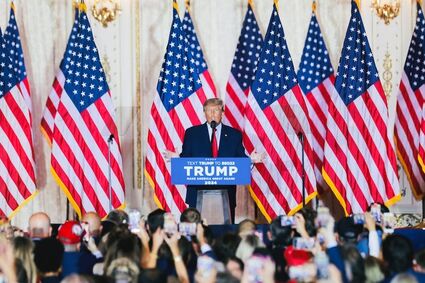 Former President Donald Trump speaks at the Mar-a-Lago Club in Palm Beach, Fla., on Nov. 15, 2022. An extraordinary antidemocratic statement from Trump, suggesting the "termination" of the Constitution to overturn the 2020 election, drew a degree of bipartisan condemnation over the weekend, with a flood from Democrats and a trickle from Republicans.

WASHINGTON - Former President Donald Trump faced rebuke Sunday from officials in both parties after calling for the "termination" of parts of the Constitution over his lie that the 2020 election was stolen.

Trump, who announced last month that he is running again for president, made the claim over the weekend on his Truth Social media platform.

"A Massive Fraud of this type and magnitude allows for the termination of all rules, regulations, and articles, even those found in the Constitution," he wrote. "Our great 'Founders' did not want, and would not condone, False & Fraudulent Elections!"