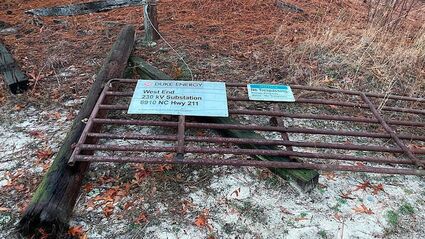 John Nagy, The Pilot via AP

This photo shows the gate to the Duke Energy West End substation in Moore County, N.C. on Sunday, Dec. 4, 2022. Tens of thousands were without power in the county after what authorities say was an act of criminal vandalism at multiple substations. The Pilot newspaper in Southern Pines reported that infrastructure at the West End substation was damaged.

CARTHAGE, N.C. - Two power substations in a North Carolina county were damaged by gunfire in what is being investigated as a criminal act, causing damage that could take days to repair and leaving tens of thousands of people without electricity, authorities said Sunday.

In response to ongoing outages, which began just after 7 p.m. Saturday across Moore County, officials announced a state of emergency that included a curfew from 9 p.m. Sunday to 5 a.m. Monday. Also, county schools will be closed Monday.

"An attack like this on critical infrastructure is a serious, intentional crime and I expect state and federal authorities to thoroughly investigate and bring those responsible to justice," Gov. Roy Cooper wrote on Twitter.