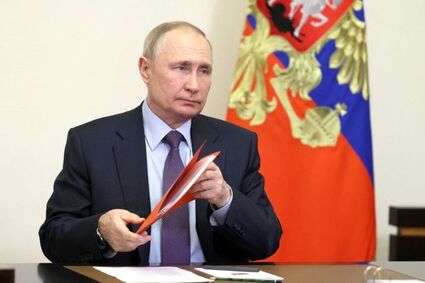 Russian President Vladimir Putin chairs a meeting with members of the Security Council via a video link from the Novo-Ogaryovo state residence outside Moscow, Russia December 2, 2022. Sputnik/Mikhail Metzel/Pool via REUTERSReuters

KYIV (Reuters) -Russian President Vladimir Putin is not sincere about peace talks with Ukraine while he is taking the war to a new level of "barbarism" by trying to turn off the lights of civilians, a top U.S. diplomat said on Saturday.

U.S. Under Secretary for Political Affairs Victoria Nuland met President Volodymyr Zelenskiy and other senior Ukrainian officials in Kyiv to show support at a time when Russia is trying to destroy the country's energy infrastructure.

"Diplomacy is obviously everyone's objective but you have to have a willing partner," she told reporters. "And it's very clear, whether it's the energy attacks, whether it's the rhetoric out of the Kremlin and the general attitude, that Putin is not sincere or ready for that."