Long-awaited U.N. conference on extinction crisis to begin this week 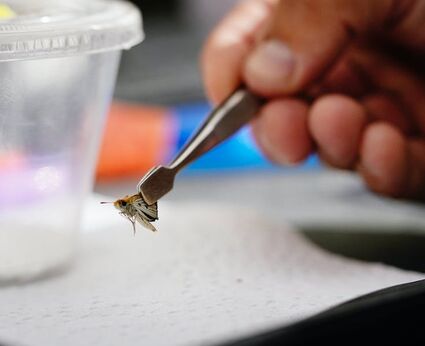 Cale Nordmeyer, butterfly conservation specialist at the Minnesota Zoo, used a tweezers to move a Poweshiek skipperling butterfly after giving it a unique dot pattern with a marker before release in a wetland on July 12, 2022, in central Michigan. The once common prairie butterflies are teetering on the edge of complete extinction, with only about 500 of these butterflies left in the the wild in the world and Nordmeyer is part of a joint team racing to save them.

Scientists, conservationists and government representatives will gather this week in Montreal to decide on a plan to stop a stunning loss of plant and animal life around the globe. The United Nations' COP15 - a conference on biological diversity - offers a rare chance for countries to set mutual commitments and milestones for restoring and protecting key lands and waters.

The much-delayed and anticipated conference comes three years after a U.N. report found that more than 1 million species are at risk of extinction within the next few decades. Scientists are calling it the earth's sixth mass extinction - the first caused by humans. The decline has already begun and is affecting every part of the world, including Minnesota where at least 150 species of animals and plants are on the verge of disappearing.

To reverse the trend, nations need to set concrete goals for saving land, funding restoration and protecting species, said Jeannine Cavender-Bares, a professor of ecology, evolution and behavior at the University of Minnesota.