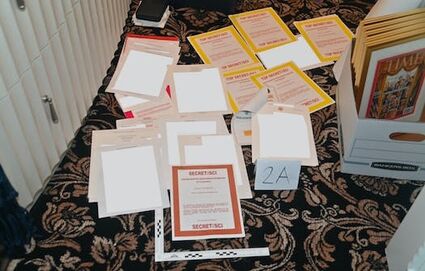 An image the Department of Justice included in an August 30, 2022 court filing shows documents marked SECRET//SCI that were recovered from Donald Trump's Mar-a-Lago club and home in Florida.

The decision by the three-judge panel represents a significant win for federal prosecutors, clearing the way for them to use as part of their investigation the entire tranche of documents seized during an Aug. 8 FBI search of Mar-a-Lago. It also amounts to a sharp repudiation of arguments by Trump's lawyers, who for months had said that the former president was entitled to have a so-called "special master" conduct a neutral review of the thousands of documents taken from the property.

The ruling from the Atlanta-based U.S. Court of Appeals for the 11th Circuit had been expected given the skeptical questions the judges directed at a Trump lawyer during arguments last week, and because two of the three judges on the panel had already ruled in favor of the Justice Department in an earlier dispute over the special master.