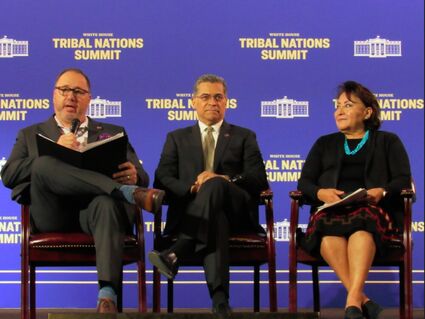 WASHINGTON-Health and justice were the buzzwords that drove conversation on Thursday, Dec. 1, the second day of the White House Tribal Nations Summit that drew more than 300 tribal leaders from across the country to discuss policy with federal employees.

Among them, he told audience members that his administration created an outreach service liaison position at the Department of Justice to address the Crisis of Missing and Murdered Indigenous People; committed $135 million to help relocate 11 Tribal communities impacted by climate change from Maine, Louisiana, Arizona, Washington and Alaska; and that he intended to sign a Presidential Memorandum establishing uniform standards be implemented across all federal agencies on how tribal consultations are conducted.

In his latest budget, released in March 2022, Biden requested Congress make $9.1 billion to the Indian Health Service mandatory rather than "discretionary" to protect the federal entity that delivers health care to 2.56 million American Indians and Alaska Natives nationwide from budget uncertainties. Tribal leaders have advocated for mandatory or -at the very least, advanced funding - for about a decade.