Ironboy defends their championship over Hoosier Daddy's, who beat The Expendables in the 3rd place game of the Alfred "Petie" Thomas 40+ Basketball Tournament. 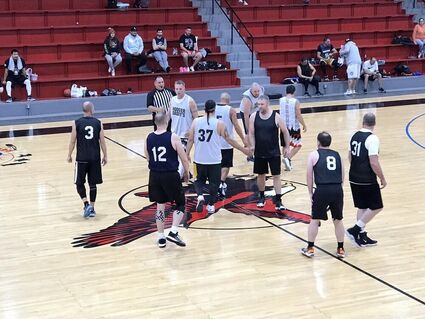 4th place went to Clearbrook/Gonvick who played some very good basketball and once again shot the lights out! They play with great chemistry and we appreciate them coming over to play once again this year.

I think most of the guys are over 50, and Mark on the right is 62, and can still get up and down the court well and connect from beyond the arc!!

The Legends game was played in honor of "Petie"

Alfred "Petie" Thomas 40+ Basketball Tournament and featured many players who played with or against Petie. The oldest were 67, 67, 63, 62