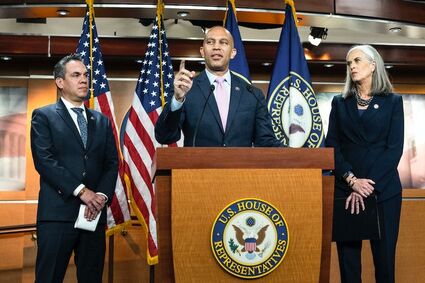 WASHINGTON - House Democrats ushered in a new generation of leaders on Wednesday with Rep. Hakeem Jeffries elected to be the first Black American to head a major political party in Congress at a pivotal time as long-serving Speaker Nancy Pelosi and her team step aside next year.

Showing rare party unity after their midterm election losses, the House Democrats moved seamlessly from one history-making leader to another, choosing the 52-year-old New Yorker, who vowed to "get things done" in the new Congress, even after Republicans won control of the chamber. The closed-door vote was unanimous, by acclamation.

"We stand on their collective broad shoulders," Jeffries said afterward of Pelosi and her team.