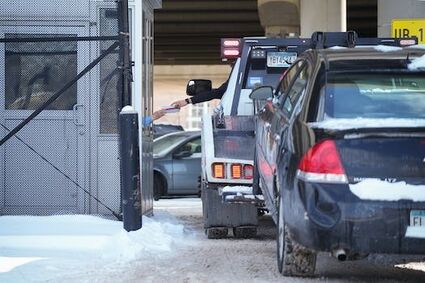 Tow truck traffic was steady at the city's impound lot in Minneapolis on Wednesday. A ticket and tow cost drivers nearly $200 - and the time to go get their cars back.

The season's first snow emergencies in Minneapolis and St. Paul made for a stressful and financially painful day for hundreds of drivers who didn't move their vehicles and spent Wednesday at the impound lot retrieving their wheels.

St. Paul police issued nearly 850 tickets and the city had 251 vehicles towed from streets where parking was not allowed on the first night of the snow emergency. By 9:30 a.m., 220 vehicles had been towed in Minneapolis - but tow trucks hauling two vehicles at a time kept arriving all morning and into the afternoon at the city's impound lot. One truck had "No Worries Towing and Recovery" stamped on its side.

There was plenty of worry for Rodney Wilson, who was preparing to move out of his north Minneapolis duplex Wednesday. Wilson said he didn't get a notification about a snow emergency, and after plows partly cleared 3rd Avenue N., he figured after 10 p.m. it was safe to park on the street near his rented home to make it easier to load up.