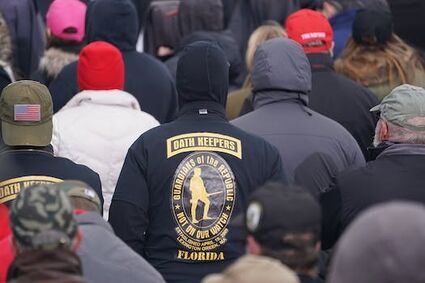 A member of the Oath Keepers looks on as supporters of Donald Trump attend a rally protesting the 2020 election results in Washington, DC., on January 6, 2021.

A Washington, D.C., jury found Rhodes guilty of sedition after three days of deliberations in the nearly two-month-long trial that showcased the far-right extremist group's efforts to keep Republican Donald Trump in the White House at all costs.

Rhodes was acquitted of two other conspiracy charges. A co-defendant - Kelly Meggs, who led the antigovernment group's Florida chapter - was also convicted of seditious conspiracy, while three other associates were cleared of that charge. Jurors found all five defendants guilty of obstruction of an official proceeding: Congress' certification of Biden's electoral victory.