Water boil order issued for more than 2 million in Houston 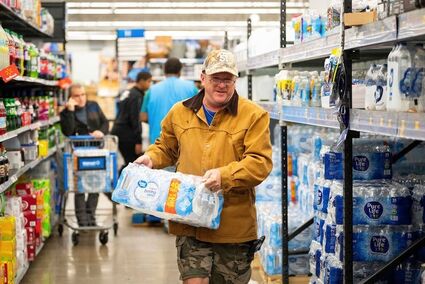 John Beezley, of Bonham, buys cases of water after learning that a boil water notice was issued for the entire city of Houston on Sunday, Nov. 27, 2022, at Walmart on S. Post Oak Road in Houston. Beezley just arrived in town with his wife, who is undergoing treatment starting tomorrow at M.D. Anderson Cancer Center, where they are staying in a camping trailer. They turned on the television after settling in and saw that a boil water notice had been issued. Beezley decided to go out immediately fearing that by tomorrow people would be buying up all of the available water.

HOUSTON - More than 2 million people in the Houston area were urged to boil their tap water Monday after a power outage at a purification plant prompted the mayor to initiate a review of what went wrong.

The boil order notice tells customers in the nation's fourth-largest city to boil water before it's used for cooking, bathing or drinking. Multiple Houston-area public and private schools, as well as some local colleges, were closed Monday as a result of the notice, while others made adjustments to provide affected campuses with bottled water and sanitizer.

Houston Independent School District officials said in a Monday afternoon statement that closures would continue through Tuesday due to "the logistical challenges caused by the notice."