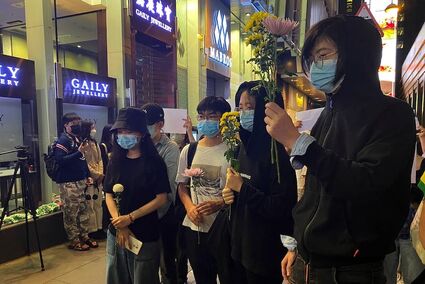 Residents hold up flowers to commemorate victims of a recent Urumqi deadly fire in Central in Hong Kong, Monday, Nov. 28, 2022. Students in Hong Kong chanted "oppose dictatorship" in a protest against China's anti-virus controls after crowds in mainland cities called for President Xi Jinping to resign in the biggest show of opposition to the ruling Communist Party in decades.

HONG KONG - Students in Hong Kong chanted "oppose dictatorship" in a protest of China's COVID-19 rules Monday after demonstrators on the mainland issued an unprecedented call for President Xi Jinping to resign in the biggest show of opposition to the ruling Communist Party in decades.

Rallies against China's unusually strict anti-virus measures spread to several cities over the weekend, and authorities eased some regulations, apparently to try to quell that public anger. But the government showed no sign of backing down on its larger coronavirus strategy, and analysts expect authorities to quickly silence the dissent.

With police out in force Monday, there was no word of protests in Beijing or Shanghai. But about 50 students sang at the Chinese University of Hong Kong and some lit candles in a show of support for those in mainland cities who demonstrated against restrictions that have confined millions to their homes. Hiding their faces to avoid official retaliation, the students chanted, "No PCR tests but freedom!" and "Oppose dictatorship, don't be slaves!"