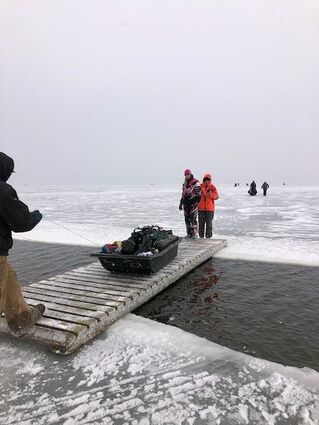 Anglers evacuated a sheet of ice using a bridge provided by JR's Corner Access resort on the south side of Upper Red Lake on Monday, Nov. 28.

What started as a small crack in the ice of Upper Red Lake grew to an expanse of nearly 100 feet on Monday morning, stranding about 200 anglers on an icy sheet with nothing but frigid water between them and the shore.

Officials responded shortly after 11:30 a.m. with airboats, drones, all-terrain vehicles and water-rescue boats. But in the end a simple, temporary bridge brought most of the stranded back to safety.

"Breakers and cracks are just part of our every day," said Adam Studniski, owner of JR's Corner Access resort, which brought out the bridge where the gap between ice bodies wasn't as wide. "This one just got a little wider but it was a super chill, calm situation. There was no panic. Nobody got hurt."