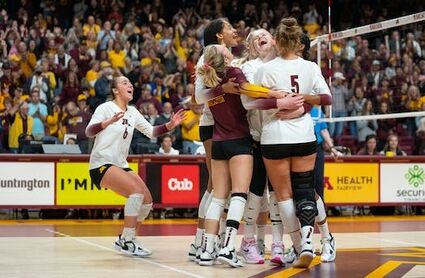 The Gophers put together an excellent finish to the regular season and were rewarded with a No. 2 seed in the NCAA tournament on Sunday.

After a stellar weekend where the Gophers volleyball team defeated two Top 10 teams on the road, they were rewarded with a No. 2 seed in the NCAA tournament on Sunday.

They will play in the Texas quarter, where the Longhorns are the No. 1 overall seed in the tournament. The Gophers will open play against Southeast Louisiana on Friday at Maturi Pavilion where they will also host another opening round matchup between Northern Iowa and No. 7 seed Florida State. The winners will play each other Saturday.

Looming for the Gophers as a potential Sweet 16 matchup is Ohio State, the No. 3 seed in the Texas quarter. The Gophers and Buckeyes split their regular season matchups, with Minnesota winning in Columbus on Friday night before defeating Nebraska.