'Stock up on blankets': Ukrainians brace for horrific winter 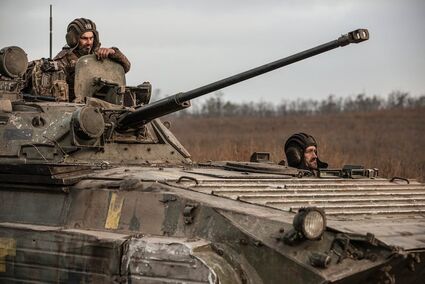 Ukrainian soldiers near Kherson, Ukraine, Nov. 12, 2022. Ukraine is on the offensive along most of a 600-mile frontline, and the Russians are in a defensive crouch. But about one-fifth of Ukrainian territory is still occupied by Russia.

KYIV, Ukraine - Ukrainians could face rolling blackouts from now through March in frigid, snowy weather because Russian airstrikes have caused "colossal" damage to the power grid, officials said. To cope, authorities are urging people to stock up on supplies and evacuate hard-hit areas.

Sergey Kovalenko, the CEO of private energy provider DTEK Yasno, said the company is under instructions from Ukraine's state grid operator to resume emergency blackouts in the areas it covers, including the capital, Kyiv, and the eastern Dnipropetrovsk region.

"Although there are fewer blackouts now, I want everyone to understand: Most likely, Ukrainians will have to live with blackouts until at least the end of March," Kovalenko warned on Facebook.