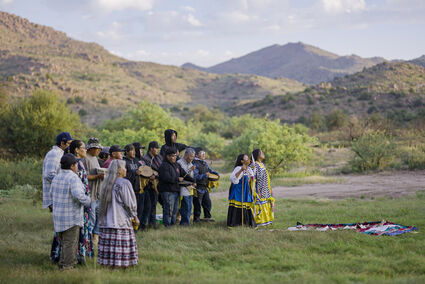 Apache families have ceremony at Oak Flat, a tradition that has been passed down for generations. Apache Stronghold v. United States argues that plans to develop a mine near Oak Flat would ruin their sacred site, and their way of life. (Photo courtesy Becket Law)

WASHINGTON -On Thursday, November 17, the U.S. 9th Circuit Court of Appeals decided it would rehear Apache Stronghold v. United States after ruling earlier this year that a private mine can proceed with operations while a lawsuit is pending.

The Apache Stronghold is arguing that efforts to develop an underground copper mine in the Tonto National Forest will destroy Oak Flat, a site considered to be sacred by the Apache and other tribes.

"Apache have gathered at Oak Flat to connect with our Creator for millennia, and we want to continue this sacred tradition," Dr. Wendsler Nosie, Sr. of Apache Stronghold, said in a statement. "The government protects historical churches and other important religious landmarks, and our site deserves no less protection. We are glad the Ninth Circuit is going to take a closer look at this decision, and we hope it will do the right thing and protect Oak Flat."